"Campy and full of shtick, affection and great fun."
The Hollywood Reporter

"I can't get that damn title song out of my head!"
David J. Hogan
author / critic
"Dark Romance" / "Filmfax" magazine

"A thoroughly enjoyable romp through blood, guts and cleavage.
"SCREAM QUEENS succeeds by never taking itself seriously or running too long.
And the lyrics are more clever than your average parody."
Rave!

"SCREAM QUEENS is a generally entertaining bit of lunacy...complete with
audience participation and a set of truly hilarious video examples."
In Los Angeles Magazine

"Without question, Scott Martin's SCREAM QUEENS
is the most entertaining new stage musical I have seen
in the last ten years, on Broadway or off.
His creative writing is fresh, brilliant and great fun!"
Dolores Fuller
Actress / Songwriter
"Glen Or Glenda" / "Rock-A-Hula, Baby"

"What 'Galaxy Quest' did for Trekkers,
SCREAM QUEENS does for horror movies.
It's a fond and fun farce about the folks on the fringes of fame and fandom."
Shari Goodhartz
Writer, "Star Trek: TNG," "Dragonheart: A New Beginning"

"It wasn't Broadway, but it came pretty darn close."
Tony Timpone
(re: Fangoria's "Weekend Of Horrors 2000")

"I loved it. The songs were great and it's such a cool idea!"
Thomas W. Lynch
Executive Producer, Nickelodeon / Disney Channel

"A sassy musical revue. An affectionate funny tribute
...with something for everyone."
L.A. Times

"SCREAM QUEENS may leave you cheering.
An infectiously high-spirited homage.
No 'boos,' please, you horror fans. Make it 'Bravo!' instead."
The Daily News

"The vivacious cast is a hoot. Martin's genre-tweaking lyrics are hilarious."
L.A. Weekly

"This campy, fun-filled audience interactive show...
could easily gather a crazy cult following all over town."
The Tolucan Times

"SCREAM QUEENS is the perfect musical that shows that these gals
have talent and they can act, too!"
Linear Cycle Productions

"SCREAM QUEENS is the most fun, inventive musical you've never seen.
Great tunes, genuine laughs and a can-do cast. See it and enjoy!"
Jeffrey B. Hodes
Writer / Producer, "3rd Rock From The Sun"

"I screamed with laughter!"
Renee Taylor
Oscar-nominated screenwriter / Emmy-nominated actress
"Lovers And Other Strangers" / "The Nanny"

"SCREAM QUEENS catches the cheap-o horror genre by the throat
and shakes every last bit of comedy out of it."
Chris Bearde
Creator of every major TV show in history

"One of the finest evenings I've ever spent in the theatre."
Douglas Urbanski
Producer of over 30 plays and musicals on Broadway and in London
Winner of the 1998 BAFTA Award for Best Picture

"What a show! What a night!
I haven't heard that many screams since I lived in New York."
Ivan Menchell
Playwright / Supervising Producer
"The Cemetery Club" / "Time Of Your Life"

"It's funnier than 'Cat Women Of The Moon' and the songs are better, too!"
Rich Proctor
Disney Imagineer

"It's the genius of Scott Martin's lyrics and Adrea Gibbs' choreography
that continue to endure long after the initial run of this production has ended."
Laura Schiff
West Coast Contributor; "Femme Fatales" magazine

"They nailed it. I was really blown away by Scott's words.
It was as if someone had sat beside us at the conventions and absorbed everything.
It really encapsulated the whole experience (of being a scream queen),
all aspects of it, and I thought the lyrics were clever and brilliant.
It was really funny."
Brinke Stevens
Actress / Producer / Actual Scream Queen

"Wonderful! Great fun! Had the best time!
It was really accurate. They showed the sad side of the business
as well as the happy side."
Linnea Quigley
Actress / Producer / Actual Scream Queen

"More fun than having to work with the real B-Movie actresses themselves!"
Rick Sloane
Director / Producer / Screenwriter
"Vice Academy" series 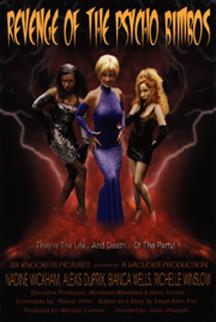 "REVENGE OF THE PSYCHO BIMBOS"